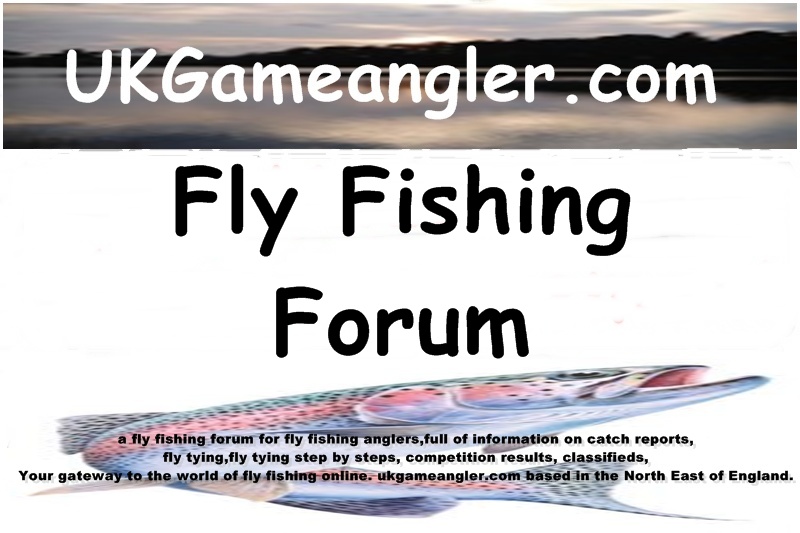 a fly fishing forum for fly fishing anglers,full of information on catch reports,fly tying,fly tying step by steps, competition results, classifieds,Your gateway to the world of fly fishing online. ukgameangler.com based in the North East of England.

Hello members,
I apologise for not intoduceing myself to since becomeing a member on UK.Gameangler.
I was a member of Gameangleronline haveing joined in 2008 when i first learnt how to use a computor.
I am 56 years of age and fished since i was a schoolboy . I caught my first Brown Trout from Billingham Beck which is close to my home.
I have fished Stillwaters since the late 70s when i got my first car.
Ive been a member of Bishop Auckland and District Angling club for about 25 years.
I missed fishing in 2002 when i lost my parents. Then in 2012 i didnt fish very much because i was not able to afford my club subs.
This year i have renewed my club subs and hope to be fishing the Tees and Wear for Sea-Trout Salmon and Brown Trout.
I like to fish the reservoirs run by NW which are Balderhead, Selset,and Cow- Green.
When i go fishing in 2013 i will tell fellow members what kind of day i had even if i dont catch a fish because that is why i joined a fishing forum. I am no expert but i have enjoyed fishing freshwater and saltwater for most of my life and long may i continue.From PB.

nice intro peter , great to see you back up and running mate .

Thanks Topcat. Ive climbed back on the sofa after spending me money up at Bowloms Sedgefield on food.
While driveing over there i noticed a few Hawthorn Flies were hitting the windscreen on the car.
While its warm i am going to get me potato sets in the garden.
Is it me just sitting around on the sofa instead of getting in the garden or have other gardeners been held up by the weather.
Ive got Onions in and me Leeks are in but only on May Ist we had a snow covering.
Last time i was at Bowloms Jersey Royals were £2-25 a pound and they stayed on the shelf.Today i got a pound of Jersey Royals for 99 pence.
Even though ive not caught A fish for nearly two years though i still could weigh a pound of potatoes out without a scale.
You wont get me saying i caught a 2 pound fish when it was a pound.
Nor will you hear me saying i caught a 12 inch fish when it was actually 6inches.
Iam to old though to talk meteric and please dont ask me to talk Text because i have been in trouble already because i didnt understand the text message.
Best get the tatties in and the hoovering done then i might be able to go fishing. Oh i dont have a wife to put me bait up make me flask ,gut me fish like these married fishermen have.LOL